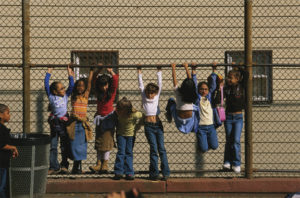 A Place to Play:A Photo Contrast of Urban and Suburban Playgrounds

The Trust for Public Land , a national non-profit which conserves land for people to improve the quality of life in our communities, believes that all children need and deserve safe, accessible places to play. This one-of-a kind exhibition of photographs created by renowned National Geographic photographer Michael Yamashita for The Trust for Public Land brings to light the vast disparity between play spaces in Newark and the surrounding suburbs.

Through Parks for People—Newark, The Trust for Public Land has created six new community playgrounds in neighborhoods where children do not have adequate open space resources, and will complete a seventh park and playground in summer 2005—an overall investment of $4.4 million. These spaces are successful because of public-private partnerships and because they are designed for, and by, the children and the communities that will use them.

About the Photographer: Michael Yamashita began taking pictures in 1971 while on a self-styled “roots” trip to Japan. What began as a pastime led to a career combining his two passions—photography and travel. He has been a regular contributor to the National Geographic since 1979 and has worked in such diverse locations as Somalia and Sudan, England and Ireland, New Guinea and New Jersey.