Todd Beamer was a passenger on the United Airlines flight in which passengers overtook the terrorists, causing the plane to crash into a field in Pennsylvania. “Let’s Roll!” were the last words he spoke. Todd Beamer’s widow, Lisa, founded the Todd M. Beamer Foundation to help the children of survivors of the September 11th attacks.

In September 2002, The New Jersey Historical Society will mark the one-year anniversary of an event that shook the world and changed our lives forever — the attacks of September 11th, 2001—with an exhibition titled, Changed Lives: New Jersey Remembers September 11, 2001.

Drawing on personal testimony, objects, and photographs collected by the Historical Society over the course of the past months, the exhibition will be a moving tribute to the state’s response to a national tragedy.

Planning for this exhibition has been generously funded in part by the Charles Emil Thenen Foundation, the Geraldine R. Dodge Foundation and the New Jersey Historical Commission. 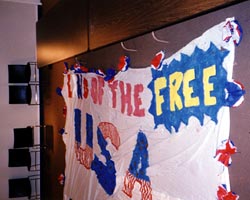 Patriotic banner hanging in Lincoln Park, Rutherford, 2001
Collections of The New Jersey Historical Society, gift of the town of Rutherford

Created by local Girl Scout troops to hang in Memorial Park-site of a food and supply gathering drive for World Trade Center relief-this banner ultimately found its way to the center of town, where it proudly hung in view of all passersby. 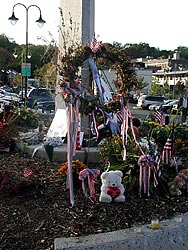 An obelisk at the South Orange train station became an impromptu shrine commemorating victims of the September 11th attacks. Three families in the town lost a parent in the World Trade Center disaster.