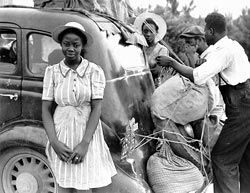 Coming Up on the Season: Migrant Farmworkers in the Northeast

An Exhibition Created by Cornell Migrant Program of Cornell University

Coming Up on the Season: Migrant Farmworkers in the Northeast traces the path of the fruits and vegetables we eat, and the lives of the people who grow and harvest them, in six parts of the Northeast. New Jersey, once the breadbasket of the East, is still a major producer of “truck” crops such as lettuces, peppers, and cucumbers. Downeast Maine is the largest producer of wild blueberries in the nation; further north, Aroostook County, long known for its potato fields, is becoming a leading broccoli area. Apple orchards range 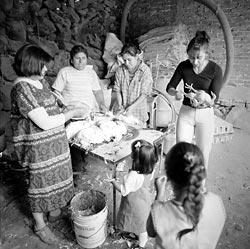 New Jersey farmworker Ofelia Villagomez and her family prepare for a celebration in their home village, Caracheo, Mexico.
Photograph by Drew Harty, 2000

along Lake Ontario in western New York; onions are a major crop in the “black dirt” of the western Hudson Valley. Southeastern Massachusetts has been the center of cranberry production for 150 years.

The exhibition explores the world behind the supermarket shelves, a vast world invisible to most of us. Even in our mechanized world, having fresh, unblemished produce still means that someone has to pick it, or bunch it, or wash it, or pack it. The Northeast still grows much of the nation’s food, and in no other region do migrants make up such a large part of the work force that produces it.

Excerpts from oral histories with workers and growers combined with contemporary photography by Drew Harty provide compelling views of the world of farmworkers today. Historic photographs, including those taken by photographers for the Farm Security Administration in the 1930s and 1940s, help visitors understand the historical forces that have shaped farmwork. Objects include tools such as broccoli knives, blueberry rakes, apple buckets, and a short-handled hoe. Also in the exhibition are paintings by students in a Migrant Education Program and “Row Harvest” a large scale painting by former migrant worker Juan Cavasos.

The exhibition is fully bi-lingual in English and Spanish, and includes a section about home, where photographs and objects from Mexico help explore the homes that workers leave behind and their aspirations for their families and communities.

Interactive sections explore such topics as pay and the trip north. A family gallery guide engages family audiences in an exploration of food, family and community while a special section explores growing up as a child in a migrant family.

A video wall entitled “Voices of the Harvest” ends the exhibition–growers, workers, distributors and consumers share their viewpoints–and museum visitors are encouraged to share their own perceptions of farmwork here in the Northeast. 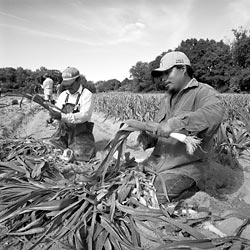 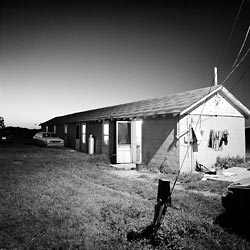 The “End of the Road” Camp, Sheppard Farm, Cedarville,

Coming Up on the Season: Migrant Farmworkers in the Northeast was developed by the Cornell Migrant Program of Cornell University, Ithaca, NY. Support for this exhibition has been provided by the National Endowment for the Humanities, expanding America’s understanding, for more than thirty years, of who we were, who we are, and who we will be; Rockefeller Foundation; New York State Council on the Arts; Newman’s Own; and Pioneer New Media Technology.