Fly to Freedom:
The Art of the Golden Venture Refugees

An Exhibition Created by
Museum of the Chinese in the Americas
On loan to The New Jersey Historical Society and on view April 10 – August 24, 2002

In 1993, the Golden Venture, a ship carrying refugees from mainland China, ran aground off the Eastern Coast of the United States. Most of its passengers were coming to this country to seek political asylum. When the Immigration and Naturalization Service apprehended the survivors, they sent them to prisons. While incarcerated, the prisoners transformed a paper-folding pastime into an art form as they created increasingly elaborate paper sculptures as gifts for their supporters. These twenty works of art speak to the difficulties that many immigrants face when they leave their homelands and are moving testaments to the human impulse to create beauty in the face of hardship.

Fly to Freedom: The Art of the Golden Venture Refugees, a traveling exhibition by the Museum of the Chinese in the Americas, is supported in part by a grant from the National Endowment for the Arts with additional funds from the Geraldine R. Dodge Foundation. 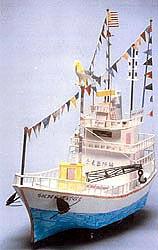 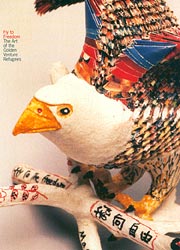 Eagle on a Branch with the words “Fly to Freedom” & “Made in York County Prison”
papier-mache, folded paper, colored markers
Artist: Cheng Kwai Sung (b.1966)