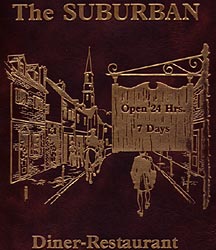 It’s everywhere, even today: this Edison diner drew on the colonial for the cover of its menu.

An Exhibition Created by the Society for the Preservation of New England Antiquities (SPNEA)
On Loan to The New Jersey Historical Society
December 16, 2002 – August, 2003

The Pilgrims most of us remember from our history books wore black hats, had the first Thanksgiving with Native American neighbors, and died in the 1600s. But as this traveling show from the Society for the Preservation of New England Antiquities shows, their legacy lived on.

Americans in the decades after the United States Centennial of 1876 looked to their colonial past for validation and reassurance in the face of enormous change-the economy was uncertain, cities and industries were rapidly expanding, and immigrants were arriving in record numbers-somehow, the “colonial” era seemed safer and better. Believing their ancestors led “purer lives,” Americans began to embrace the objects and imagery of the 17th and 18th centuries with enthusiasm. Through fabulous advertisements, the exhibit shows how entrepreneurs capitalized on the craze to sell everything from canned food to insurance. And through everyday objects-some from the Historical Society’s own collections-the show makes clear that the reveal of all things “colonial” was more than a passing phase.

In Pilgrims, Patriots, and Products, you’ll also see that the use of colonial names and imagery is still very much with us today. A perfect example is the “colonial” style diner, invented right here in New Jersey by Kullman Industries, Inc. in 1962; these brick-clad buildings were designed to evoke the American colonial period and break with the stainless-steel “diner” look most people were used to. The style caught on, and “colonial” diners sprung up all over New Jersey and beyond. 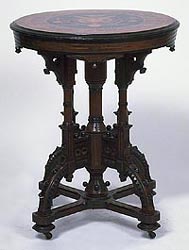 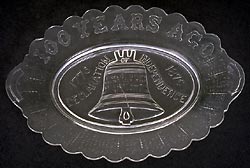