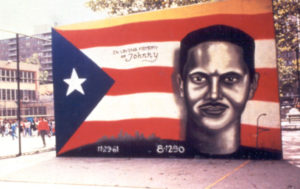 The meaning and use of the Puerto Rican flag can best be understood as a folk tradition. While not always a handmade object, the flag functions as a tradition, signifying shared values, aesthetics, and group beliefs. It is not only the object itself that is “folklore,” but its meaning and practice within the community.

Particularly during the Puerto Rican Day Parade, t-shirts and bandanas are not only emblazoned with the flag, but whole arrangements of flags transform people, cars, bicycles and baby strollers into mobile works of community-based art.

This exhibition features traditional Puerto Rican bobbin lace (mundillo) that depicts images of the flag, color photographs that show how the flag is utilized as a symbol, carnival vejigante masks, samples of murals and urban memorial wall art, as well as assemblages which use the imagery of flag in public parades and festivals and in private spaces and altars in the home.

Music is an important part of the exhibition because it has been one of the most significant ways in which Puerto Ricans of all generations have shared a defining element in retaining their culture.

The flag, as part of a folk expression that integrates politics and grassroots cultures, is an important image in the music of plena and la música jíbara (music of the island’s campesinos) in Puerto Rico. Plena, a traditional musical genre that developed early in this century in the urban areas around the coastal city of Ponce, is referred to as “el périodico cantado” (the sung newspaper). An expression of the working class and their struggles, plena is a vocal commentary on everyday life, issues and events. Many old and newly-created plenas comment on the flag or use its imagery in their lyrics. The children’s song, “¡Que bonita bandera!” can be heard at parades, processions, or anywhere Puerto Ricans gather to celebrate their puertorriqueñidad.

The exhibit ¡Que bonita bandera! will consist of color photos, black & white historical photos, and artifacts, and a memorial wall mural. The photographs are from the collection of noted photographers Martha Cooper and Carlos Ortíz, and will present images from the Puerto Rican Day Parade and everyday life which demonstrate the various ways in which the Puerto Rican community displays the flag. Historical photographs will be provided by Centro de Estudios Puertorriqueños, CUNY. Folk art objects will include mundillo by master artist Rosa Elena Egipciaco; a vejigante mask by Jorge Silva, who has worked in the taller in Ponce, Puerto Rico; mural art by the internationally-known aerosol artists Chico García and Tats Cru, and art by local artists George Zavala and Francisco López. Interpretive materials will include mounted labels for each photo and object, a free accompanying booklet with photos and an interpretive essay.

This exhibition was created by and funded by New York State Council on the Arts and the National Endowment for the Arts. Thanks to Hostos Center for the Arts & Cultures.