Fertile soil for fruits and vegetables. Finely-grained sand for glass. Rich deposits of ore for iron. The brute force of water for power – and more. The exhibition Resource-Full New Jersey traces the stories of some of New Jersey’s natural resources and looks at how people have used them to transform the state into the place that we know today.

While the stories in this exhibition are only a sample of the many we could tell, together they highlight New Jersey’s importance in America’s industrial history. Like much of the rest of the country, New Jersey has a natural richness, but it is its location close to major markets, an elaborate network of waterways and roads, and the creativity of the people who harness the natural resources that distinguish the state. 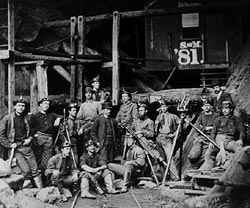 Student miners hold the tools of their trade, including the surveying instruments essential to mapping mining claims and drills and picks that they will use to attack the rock that holds iron ore. In the 1800s, boys as young as nine years old were employed in iron mining to carry water and drills to the miners or drive the mules that lifted the ore in buckets. Later, in their early teens, they would graduate to swinging hammers with the men.

A glassblower would have blown glass freely, without use of a mold, to make a shape like this. This glass pan was used for cooling fresh cow’s milk. Although this form was usually made in clay, which is sturdier, glass might have been the chosen material in places like southern New Jersey where the necessary sand resources were more commonly found.

Changes to the environment inevitably take their toll. As we explore a few of the stories about the shaping of New Jersey and its economic growth, the exhibition also asks the visitor to consider the price we pay for prosperity.

Each of the exhibition’s six sections looks at the state’s natural resources, the work done by New Jerseyans to transform the resources and the product that the resources become. In the sections Fertile Soil, Fine Sand, Mighty Minerals, Malleable Clays, Power of Water, and Creative People, visitors see the following items, respectively: a Native American stone grinder; a glass pan for cooling cow’s milk; accident reports from a 1911 mine; spools of silk thread; a clay chamber pot; and a “Little Gem” crystal receiving set.

Visitors may also use a stereoscopic viewfinder, create a crate label, design a jug, pick up and read reproductions of actual documents such as a diary, mine reports and trade cards, and see a video. 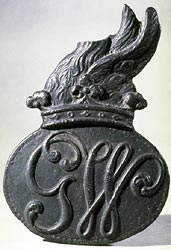 Foundry workers pouring melted iron into molds made iron castings such as this one. The device with the initials “GW” relates to iron fireplace backings ordered from Batsto Furnace by George Washington, the first president of the United States. Bastso Furnace primarily produced pig iron, but in the years just before the American Revolution the product line was diversified to include pots, kettles, skillets, and heating stoves, as well as weights, wheels, and other devices for commercial applications. 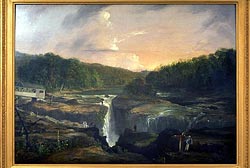 Passaic Falls
Oil on canvas, about 1845
Attributed to Jesse Talbot

Long after the power of the Passaic Falls was harnessed and the factories of the silk industry were built, artists continued to depict the falls romantically in what was imagined to be their prehistoric appearance.