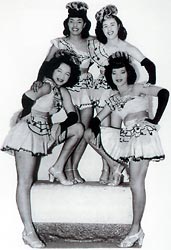 This presentation of Stompin’ at the Shore at The New Jersey Historical Society was supported in part by a generous grant from The John Ben Snow Memorial Trust.