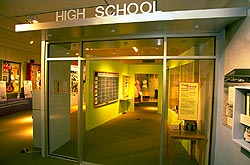 Teenage New Jersey looked at how teen culture in New Jersey defined what it meant to be a teenager in the United States from the 1940s until the 1970s. Named the best exhibition of 1998 by the American Association of Museums and received an Award of Merit from the American Association of State and Local History. Traveled to the Tyne & Wear Museums in Newcastle, England, 1998-1999.