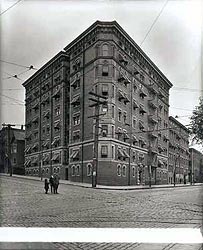 The early-twentieth century was a high point in the growth of American cities—and Newark was exemplary. A growing city with a booming economy was an ideal location for a commercial photographer to set up shop—and in many ways is why commercial photography emerged as a viable trade. William F. Cone’s clientele reflected the range of small and large businesses, government agencies, and charitable and civic organizations that characterized commerce in the modern city. 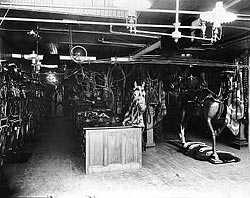 All the accoutrements for the fashionable rider in an era when actual horse power still played a role in Newark transportation. 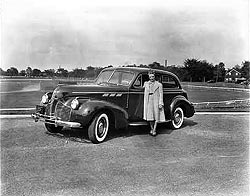 What year do you think Cone took this photo? Sometimes photographs can be identified by clues that are distinctive to an era-such as the style of dress or the model of a car.

Cone’s photographs captured the diverse and vibrant world of the city’s businesses, organizations and communities between 1895 and 1966. Through staged photographs for commercial advertising, documentation for insurance companies, major public events gatherings and on-the-street scenes of a building and growing city, Cone’s camera eye was always from the perspective of his clients, and shaped, as best as he could manage, by their wishes. 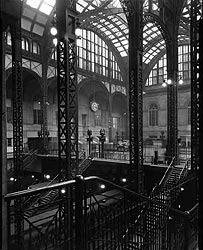 Cone was able to capture the exquisite detail in this photograph using glass plate negatives, which were bulky, expensive and extremely delicate. Even if he only used a section of a negative, Cone knew that the final large print would still be sharp. 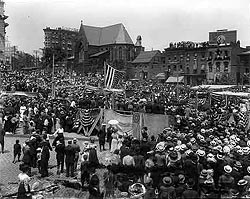 Cone photographed the crowd gathered on at the intersection of High and Market Streets to witness the dedication of the Abraham Lincoln statue. The statue was sculpted by Gutzon Borglum (best known for carving Mount Rushmore) and placed at the entrance of the Essex County Court House (to the left, but out of the frame). The church behind the American flag is St. Philips, which in the nineteenth century was an African-American Anglican Church. Behind St. Philips you’ll see the Briderman Apartments, which Cone photographed in 1902. Why do you think Cone took the photograph from this position? President Theodore Roosevelt was among the dignitaries who attended the ceremon