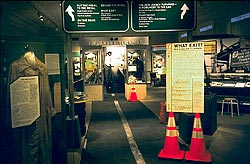 What Exit? New Jersey and Its Turnpike

When the New Jersey Turnpike opened in 1951, it was one of the most impressive roadways in the nation and one of the first modern turnpikes. Called “the most spectacular piece of highway ever built” by the Saturday Evening Post and “the world’s model highway” by the Newark News, the Garden State roadway drew widespread acclaim and captured America’s imagination. Today, the New Jersey Turnpike is the most heavily traveled toll highway in the United States.

Now, relive the creation of this mammoth road through authentic artifacts, striking, never-before exhibited photographs, 1950s film footage, and hands-on activities-including “building” a piece of the roadway-in What Exit? New Jersey and Its Turnpike. This exciting, interactive exhibition for adults and children is on view at The New Jersey Historical Society through August 3, 2002. Hear the voices of the people who make it run at “listening stations,” add your opinion about the highway, and consider the consequences of the car in American life. 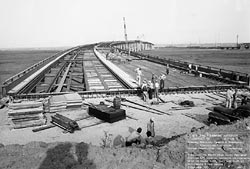 Photograph of the construction of the Hackensack River Bridge, October 1951
Courtesy of HNTB 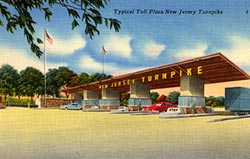 There is something for everyone in What Exit? -so make sure to see it at The New Jersey Historical Society before it closes this summer. Or, make plans to see it at one of its traveling stops:

As you’ll see, there’s more to the Turnpike than meets the eye!

This exhibition has been generously funded in part by The Office of Educational Research and Improvement, U.S. Department of Education, under a grant from the Fund for the Improvement of Education, PR Award Number R215K010019; The National Endowment for the Humanities, expanding America’s understanding, for more than thirty years, of who we were, who we are, and who we will be; Public Service Electric & Gas Company; A Special Projects Grant from the New Jersey Historical Commission, a division of Cultural Affairs in the Department of State; The New Jersey State Council on the Arts/Department of State, a Partner Agency of The National Endowment for the Arts. 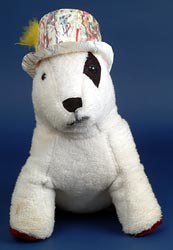 Spuds was the loyal friend of one Turnpike toll collector who liked to liven up the holidays by dressing up “Spuds” and displaying him in his toll booth. When the practice drew too many curious drivers to the toll collector’s lane, slowing things down, he had to take Spuds off duty.